Businesses and individuals leading the way in health and safety have been recognised at the Site Safe Evening of Celebration, held at Alexandra Park in Auckland on November 9.

The annual event attracted more than 270 guests and announced the winners of the 2016 Site Safe Construction Health and Safety Awards, as well as hosting the Site Safe Certificate in Construction Site Safety graduation.

The evening kicked off with a speech from the Minister of Workplace Relations and Safety, Michael Woodhouse, which was followed by the graduation ceremony, during which more than 70 graduates crossed the stage.

The event also recognised Site Safe’s newest Life Member, Bill Donaldson, who was presented with a special trophy celebrating his life-long contribution to health and safety.

Site Safe Chief Executive Alison Molloy said Mr Donaldson had been a “huge advocate” for health and safety in the Southland building industry.

“Colleagues say he has attracted a team of loyal and dedicated staff, and has a reputation for putting the safety of his workers first.”

Guests were treated to a stand-up performance from 7 Days comedian Ben Hurley, which was followed by the highly-anticipated announcement of the 2016 Construction Health and Safety Award winners.

AGL Scaffolding and Rigging scooped the Unitec Safety Innovation Award for small to medium organisations for their scaffold awareness sessions.

The Christchurch-based business initiated several of these awareness events, which highlighted what a safe scaffold should look like.

As part of the sessions, AGL invited participants to compare non-compliant and compliant scaffolds and encouraged other businesses to engage with best practice guidelines for working platforms and scaffolding.

The judges’ commented that it was exciting to see such a small business demonstrating such strong leadership and commended AGL for reaching out to other businesses by tackling a challenging issue head on.

AGL’s Health and Safety Officer Kanei Johnson congratulated the other finalists, saying health and safety was not always an easy job.

“It’s not always an easy journey, but it’s great to be able to share a night together to acknowledge all the hard work that goes in to health and safety.”

The system, which was designed and build by the Dunedin-based firm, allows natural light, equipment storage and ventilation into lift shafts, as well as providing a safe exit in case of emergency.

The hoarding system shows great potential for use in a wide range of other applications.

The judges said they were impressed by how well-researched, innovative and practical the system was.

Farra’s Health and Safety Manager Logan Miller said it was fantastic to see that health and safety was being recognised.

“It’s really good to see these kinds of events going on, especially in this industry, to recognise the really great things that are going on.”

The hoarding system had been designed by the workers themselves, Mr Miller said.

“This award is for them, more than it is for Farra.”

The Fulton Hogan/John Holland joint venture was awarded the Kensington Swan Safety Leadership Award for their dedication to creating a strong safety culture on the Hunua water main project.

The venture has fostered a zero-harm culture through several initiatives, including individual start cards, a spotter competency programme and the establishment of “Golden Rules”.

The judges said: “The Joint Venture deserves to be recognised for its array of initiatives that improve the safety culture on site.

“The venture’s approach shows how important it is to engage with workers and subcontractors from the very beginning of the process.”

Hunua’s Project Manager, Tony Mills, said that he and his team had taken up the challenge to drive a better health and safety culture on the long-term project.

“And I’m immensely proud to be a part of that process.”

Jo Prigmore and Neill Kydd from Fulton Hogan Marlborough took out the WorkSafe Safety Contribution Award for an individual or small team for leading a step change in quarry management practices.

The judges were particularly impressed by the pair’s “guarding wheel” tool, which allows workers to calculate the safe distance for guarding machinery.

The judges commented that it was “fantastic to see people taking a collaborative approach on safety”. They felt the guarding wheel was a practical yet engaging innovation which had the potential to go a “long way” towards improving quarry safety.

Safety Manager Jo Prigmore said keeping things practical had been a big part of making their guarding wheel a success.

The judges made a special mention of NETcon in the leadership category.

The business was the first in New Zealand to implement “Mates in Construction”, a workplace suicide prevention programme heightening awareness of mental health issues by reinforcing the idea that suicide prevention is everyone’s responsibility.

The judges said tackling this difficult but important subject was a “courageous and proactive” move by NETcon.

NETcon’s General Manager of Strategy, Operational Compliance and Security, Dave Armstrong, said suicide rates were high amongst middle-aged men, and it was an issue that must be addressed.

“It’s all about guys looking after their mates and saying ‘hey, something is not right’.”

This year Site Safe had a record 219 graduates, many of whom attended the official graduation ceremony at Alexandra Park.

By participating in a range of Site Safe courses, students earn NZQA credits towards the Certificate in Construction Site Safety qualification, which leads to lifelong learning and the development of leadership skills in health and safety.

Site Safe offers a scholarship programme for this certificate-level course and this year announced eight scholarships will be awarded.

Photos of the evening can be viewed here.

Site Safe would like to acknowledge event sponsors Hawkins, Fletcher Construction, Unitec, Cassidy Construction, Geeves Scaffolding, NZ Print, Vertical Horizonz, Kensington Swan and Worksafe NZ, without whom this event would not be possible. 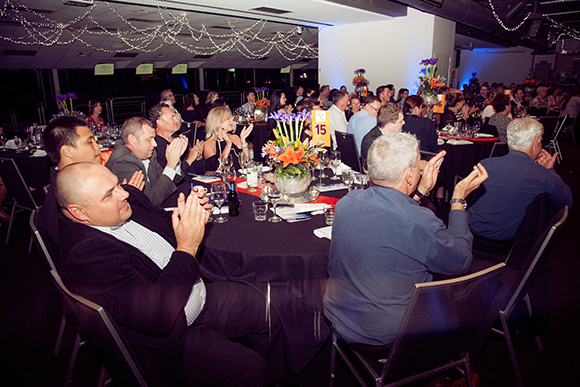