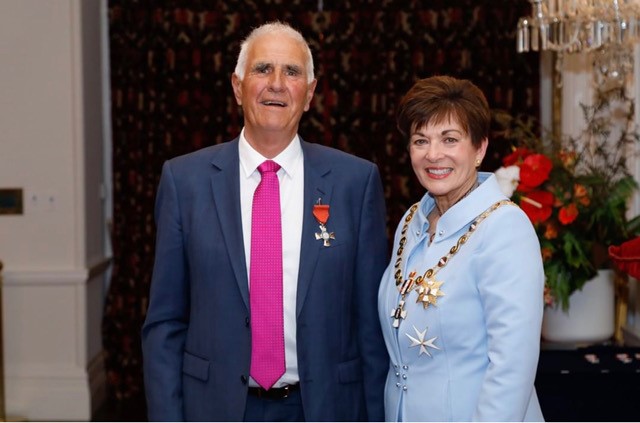 A long career of rolling up his sleeves and getting stuck in has seen Site Safe's chairman, Peter Jackson, recognised in this year's Queen's birthday honours list.

Peter, a Site Safe board member since 2010 and chairman since 2017, was made a Member of the New Zealand Order of Merit for his services to the trades and business.

Peter says he was completely blown away by the unexpected news.

"It was a big surprise – I looked at my wife and thought "is this really happening?" – it's something I'd never even thought of."

Backed by his wife Carol, Peter took on the family plumbing business, Jackson Plumbing, at the tender age of 22. During 45 years in business, they trained more than 80 apprentices. Peter's belief in trades education has seen him involved with the Apprenticeship Training Trust, the Southern Institute of Technology and he is chairman of the Industry Connection for Excellence. He also volunteers as a business mentor and has served as both chairman and deputy chairman on the Plumbers, Gasfitters and Drainlayers Board, where he was central to developing their regulatory scheme.

Never one to sing his own praises, Peter credits much of his success to his hardworking wife, saying he couldn't have done it without her.

"In fact, you probably should be interviewing her!" he says.

He sums up his attitude to public service with the simple motto "it's a lot easier to do someone a good turn than a bad one" and says he is a strong believer in chipping in wherever he can to help your community.

"I feel that if you are going to live and work in an area, you should help out when you can."

Peter says that during his long career in the trades he has seen a huge shift in attitudes to health and safety – and credits the work done by Site Safe as a gamechanger.

"You could say that safety wasn't paramount when I started my apprenticeship, but it's definitely become more and more important as time has gone on, and a huge part of that has been ensuring that people don't just talk about safety, but act safely. There used to be a "can do" attitude that was really risky."

"We've seen a massive change since then. People now know what's expected of them when they go on site – and Site Safe have had a huge influence in that. 20 years ago, you used to just wander on site and there was no concept of safety, so a lot has really changed for the better."

In addition to his contribution to the training sector, Peter is a New Zealand representative on the World Plumbing Council, which works with the World Health Organisation to improve water quality in developing nations.

Find out more about our diverse and skilled board and leadership team here.