Preparing for the summertime stress 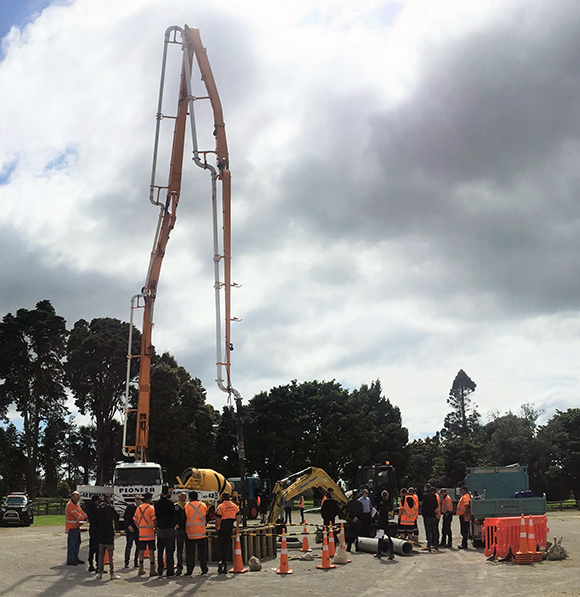 A worksite, including a concrete truck, was set up to show the hazards associated with multiple tasks being performed onsite at one of the stations created for Fulton Hogan's BOP  Safety Day.

Christmas is coming. And that means so are more potential workplace incidents.

It’s a phenomenon civil construction company Fulton Hogan has identified and that’s why every regional office had a Safety Day in October.

Anita Varga, the Regional Manager for the company’s Bay of Plenty Region, says the company’s safety stats show the rate of incidents and near-misses go up in mid-October.

“It’s one of the reasons we have the Safety Day when we do,” Anita says.

“It’s a good way to make people stop, step back, and just think about how things are going.

“As you approach Christmas the workloads ramp up with many clients wanting their projects completed by Christmas.  And even on an individual level there’s pre-Christmas stress – ‘do I have enough money; do I have enough leave?’ There’s a whole lot of things going on in people’s minds.”

She says all the pressures flow on and can mean shortcuts get taken.

“If you’re tired, rushing and frustrated, and you need to get your risk control plan done, it gets very easy for people to just tick the boxes.

“So we got people to stop, think about things, and ask themselves why is it so important to get safety right.”

This year Fulton Hogan asked each region look after their own Safety Day, but they all had to be done by October 18.

Each one is customised for the company’s 13 regions, though they do get clear input from CEO Graeme Johnson in the form of a video presentation.

“Every region started off with a video that was presented by Graeme and it is based around pre-season training using rugby terminology,” Anita says.

The planning to make the day constructive and interesting started with her, her safety team and other staff members who looked at the stats for what were the main safety issues.

“I broke my team into six groups of about 30 and it took them about 45 minutes to do each of the six stations we came up with.

“Putting them in a classroom for too long is just not the right way to go with our staff. So we wanted each session to be long enough so they would learn what they had too, but not so long they’d get bored.

The planning team came up with stations looking at personal protection, communication and team building, hitching trailers and how to complete a risk control plan.

“In that particular case we brought our civil construction team and our construction team together. We said to them, ‘if you were working on a site with cranes, drainage work being done, trucks coming in and out, working side by side with subcontractors, what were the risks they needed to identify?

“We actually set up a site with a concrete pump and the other bits and pieces. It was quite good because our teams work side by side quite often but they don’t necessarily know all the things each other does.”

There was also an emergency response station and a back-care station where a local osteopath was brought in to show the teams why we should look after our backs.

“There were some things like trailer hitching where some staff said, ‘oh, we’ve done this lots of times.’

“But I’ve stood there and watched a guy who thought he was doing it all correctly till the fleet manager said ‘whoa, hang on a minute! Why are you taking the chains off first?’ Immediately it was ‘put chains on first, take them off last.’”

Another station was setting up some safety no-no’s and seeing if they were spotted.

“Things like pipes not being put away, or people understanding how heavy the concrete coming out of the boom of a concrete pump is.

“And we broke the teams up so they had to work with people they’d never worked with before. It worked out really well and there was plenty of good feedback.”

In fact, the results of the day were so positive it is guaranteed to keep the Safety Day going nationally.

“It’s a huge investment by the company, I mean, Auckland alone has 800-plus staff.

“But we’re not really worried so much about the investment of the dollars because that comes back tenfold, just because you’re investing in people being safe.”

The team from Fulton Hogan’s Bay of Plenty office at the recent Safety Day.