Two recently mishandled electrical tests, which caused significant fire damage to a home and exposed school children to the risk of electrocution, have spurred a public safety alert to the country's electrical workers.

WorkSafe issued the alert to remind workers they are legally required to carry out a polarity test before making a connection.

These tests are done during installations to ensure the Live and Neutral conductors are connected correctly within all electrical accessories such as wall sockets or plugs.

WorkSafe said a live polarity test was used to examine the connection of a recently installed mains cable and mains entry box when an incident occurred.

"Because the connection was transposed between the phase and the neutral at the mains entry box, it resulted in the installation being livened in a fault condition."

The transposition of the mains livened any electrically earthed connections, including a hot water vent pipe, causing a current to flow between it and an iron roof. Localised heating and arching soon triggered the building paper to ignite.

"This resulted in significant fire damage to the roof space of the residential dwelling."

"This was a serious near-miss incident and created a risk of electrocution for anyone coming into contact with the fence.

"Turning the power on to conduct the polarity test created a fault situation in which the transposition of the mains livened the electrically earthed connections."

They said the iron cladding of a storage shed on the school grounds was livened, while several iron poles leaning up against the shed were also in contact with the neighbouring iron fence.

This created a flow of electrical current between the shed and the neighbouring fence, causing arcing to the fence.

WorkSafe said these incidents would have been prevented by using the correct method of polarity testing.

The Electrical Workers Registration Board has previously expressed that polarity testing is “absolutely critical” and must be independently verified by the installer, inspector, and person connecting to an electricity supply.

“The underlying principle of mains polarity testing is to carry out all the necessary tests and checks that will ensure the phase and neutral conductors are not transposed and that the neutral is continuous and earthed.

“Never liven mains to carry out live polarity testing unless correct polarity has first been proven. Failure to do so can create an immediate and serious risk of electrocution, shock, or fire should the mains conductors be transposed.”

A live polarity test should only be carried out after the correct polarity test has been determined. Following incorrect procedures or a simple lapse of judgment while dealing with electricity can result in serious injuries or even death.

Of these, six were electrical-related notifiable accidents (non-fire) and resulted in a fatality and injuries to five people.

As a not-for-profit organisation with an extensive, nationwide membership base, Site Safe is committed to positively changing the health and safety culture for Kiwis across a range of industries.

Site Safe Learning Facilitator Rahim Harjee is one of our passionate staff who draws on his more than 17 years of experience in the New Zealand Electrical field to deliver these training courses.

He said it was an essential refresher for electrical workers and covered the six mandatory tests that have to be done in line with the AS/NZS 3000 (Australian/New Zealand Wiring Rules) and as a requirement of the board.

Rahim said these recent near-misses were a reminder of how fundamental the testing is, particularly dead or de-energised polarity testing.

"Testing is so critical. These events do point out that even at the time of testing, you need to ensure that you're careful when you turn [the] power on for the first time because if you haven't done the dead polarity [test], then you have the potential of burning something down or even hurting [people]."

Site Safe's competency course is prescribed by the Electrical Workers Registration Board and emphasises testing, testing procedures, doing practical assessments and analysing the consequences when testing is not followed.

Rahim said he continues to learn something new each time he meets with groups doing the electrical competency course despite his vast experience.

"I've never come across someone who finished the course and said that it was a waste of time,” he said.

"Give it 100 per cent because you will gain something out of it no matter how qualified or experienced or knowledgeable a person you are. There is always going to be something that you will pick up, maybe not from the content but from other people's experiences."

To learn more about how you can sign up for our Registered Electrical Workers or any of our other training courses, visit www.sitesafe.org.nz/training. 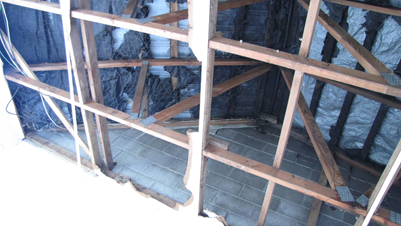 Damage from arcing on the iron fence. Credit: WorkSafe