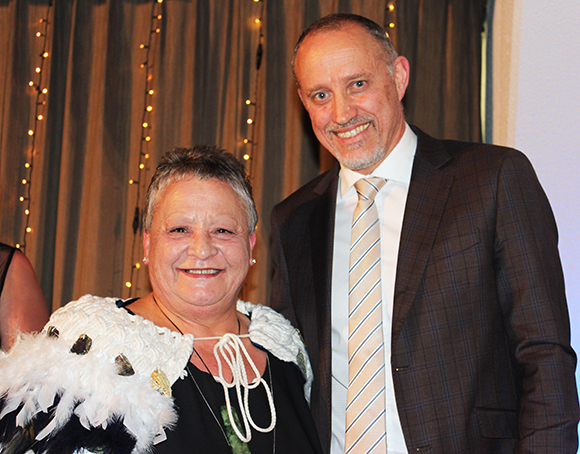 Jenni Maxwell says everything she’s done up till now has been preparing her for her job as a trainer for Site Safe.

She’s had a 10-year career in the Army, 18 years as a consultant for ACC, but she says being in front of a room of trainees is where she gets to shine.

“I had a group the other day that was fabulous and they allowed me to be the best that I could be. It was fantastic, the humour and the laughter!

“You try and deliver the lessons with passion and flair and provide a different insight,” Jenni says.

”I don’t just talk about health and safety systems and policies, I talk about valuing life and what does that mean to our trainees. That’s what I am passionate about.”

Jenni grew up in Te Awamutu, the result of a lucky meeting between her Scottish dad, who was a builder working on the Kapuni gas plant in Taranaki, and her Maori mum. They moved to Te Awamutu where she went to Te Awamutu College. It was also where some “”nerdy looking guy” used to play classical music during school assemblies. Went by the name of Neil Finn, or something like that.

She herself is a dyed in the wool, old-school rock and roller. There was a mini-family band to start things off, and she loves the dancing, the music, and the car - a 64 Chev Impala four door with a 350 under the hood. “I named her Thumper and she can boogie.”

“We go to ‘hops’ every month but it’s all really family-based and that’s what I love the most.”

Nowadays home is in Lower Hutt which is the hub for her and her partner and two daughters.

A career based on communication

Jenni’s career path has been varied, but there’s always been a strong emphasis on communicating with people, in one form or other.

Her first job out of school was working in a telephone exchange as an operator, patching calls through.

“It was fascinating - you could be listening in on a call to hear who was having an affair from Te Awamutu to Putaruru!”

At 17 she joined the Royal New Zealand Signals Corps in the Army as a communications specialist. She actually wanted to be a driver, but the Army had different ideas.

She was told she and two other women would be the first to leave.

“I just thought” ‘You’re not going to bloody beat me.’

“We were actually the last of our intake to leave!”

She ended up staying in the Army for 10 years, finishing as a Staff Sergeant.

“When I left the Army I also left the booze culture behind - and I have never ironed my clothes since!”

But the training she received has proved invaluable,

“I’ve never struggled for a job since leaving. People see your military service certificate and they admire your work ethic and your discipline.”

After doing everything for the Army Jenni said it was time for a bit of time for her own goals. She settled down with her partner and had her ‘two beautiful girls”.

She then joined ACC and spent 18 years as an injury prevention and management consultant with them.

“My role there was to work with employers to help them create safer workplaces. It involved presenting, training, educating and auditing, all roles which I continue to value.”

Construction in the soul

“I worked with employers from every industry but from all the industries I had an association with, construction had my heart and soul. Though forestry came a close second!

“I worked and managed the construction portfolio for ACC Injury Prevention and this is where I had the privilege of working in collaboration with both WorkSafe NZ and Site Safe.

“The ultimate achievement for us was to collaboratively plan, host, and manage the Wellington Construction Apprentice Safety Challenge for the Wellington region.

This was largely due to the hard work by Jeff Strampel, Gerry Kalogeropoulos  and the entire Wellington Safety Liaison group at the time. It was a  magnificent occasion which remains a permanent highlight of our careers.”

She left ACC in 2018 and had a few months off before Jeff Strampel, the Central Regional Manager, called and asked if she was interested in a role at Site Safe.

It started as a secondment and became fulltime this year.

She says it’s her dream job for all sorts of reasons after her long stint at ACC.

“It seemed a natural progression for me. I have a natural fascination and love of construction.”

”I think that’s due to the realness of the people. I’m not into corporate environments, that’s not me at all. But put me on a building site with a bunch of builders and I am me.”

“Valuing life is what drives me to be the Safety Advisor I need to be for Safe Site.

My passion for life is very real, as is the way I deliver Site Safe’s construction-based training.

“I remind our learners that they are all someone’s son, uncle, brother, daughter, father and mother.

And to me, perhaps this is the way we should be looking within ourselves to realise what we need to value – ourselves.”

Jenni's 64 Chev Impala four-door with a 350 under the hood. She calls it Thumper.