When Being Prepared Counts 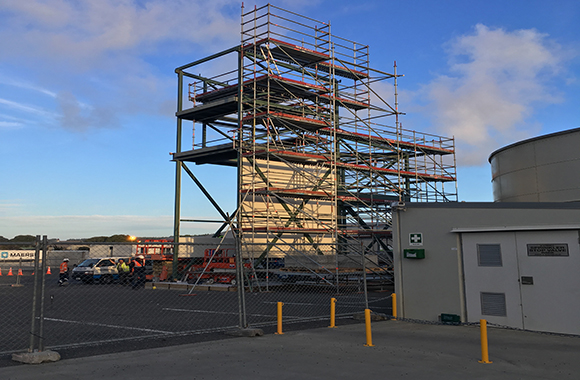 Nobody wants to see their mate fall from a 10m scaffold.

But that’s what could have happened if the team at a lower North Island scaffolding company hadn’t put their health and safety training into action when their colleague suffered a seizure at height.

Scafit’s Managing Director David Crowley says the team’s quick response made all the difference in what could have been a life-threatening situation.

“The guys acted with speed and anticipation - but what made a big difference was that before the day had started, they had gone through the prestart planning including the rescue plan and everyone was well briefed on what would need to happen.

"Within minutes they had everyone doing their job as discussed in the morning.”

Scafit’s Whanganui supervisor had been installing scaffolding at 12m and had just received a standard from the worker below him when he noticed a blank stare on his team mate’s face. The supervisor alerted another colleague, who quickly prevented the man from falling as he slumped back over the guardrail. Putting their rescue training into practice, the team on the ground called an ambulance and deployed the rescue kit. After regaining consciousness, the man was assisted down and taken to hospital by the waiting ambulance.

The worker has since been cleared to return to work but remains on transitional duties on the ground while his condition is investigated.

“Everyone had the ability to react without losing control of the situation, so the rescue ran as planned,” David says.

“There’s no question that was a result of training and prestart planning and that was the feedback that came back from staff post-investigation – everyone just made stuff happen.”

The team’s quick response was a reflection of the company’s ongoing investment in health and safety, training, and good working at height gear such as harnesses and rescue kit, David says.

“I’ve no doubt that five or six years ago that it would’ve been completely different. We wouldn’t have had the training and the rescue knowledge and the prestart focus on the ‘what if’. The outcome could’ve been so different.”

David says the scaffolding company, which has offices in Palmerston North, Whanganui and Wellington, was inspired to ramp up its focus on health and safety after seeing a presentation on the “Safety Wingman” campaign at Wellington Airport. The campaign, which was a finalist in the 2015 Site Safe Safety Innovation Award, promoted and rewarded worker engagement with health and safety.

David says for him the campaign reinforced the message that there needed to be a culture change, where health and safety was driven by employees, rather than management

“It’s all about employee engagement rather than being compliance driven.”

Scafit now has daily prestart meetings on every job, weekly toolbox and branch meetings, and monthly team meetings, including board meetings where health and safety is the first item on the agenda. The company also employs its own full-time trainer and requires all its workers to wear harnesses if working at height.

Scafit has invested heavily into the ACC workplace accreditation programme and has successfully completed the pre-audit of the final tertiary stage.  Dave says this demands an increased level of communication, planning and considerable discipline from managers, and as a by-product the team has benefited across many other areas, making Scafit a much better company.

Scafit’s workers have Site Safe building construction passports and the company is keen to train up some of its workers to Certificate level. A number of staff members are also completing the Site Safe Supervisor course.

And while the management team have been essential in providing training and encouraging good practices and reporting, it is Scafit’s workers that are now driving the focus on health and safety, David says.

“It’s gone from a company philosophy to being driven by the guys on the ground floor.

“It’s not just a management thing. People now have a clear understanding that it’s about going home to our families.”

David says while the benefits of investing in health and safety are not always immediately obvious, they were crystal clear in this situation.

“It puts it all into perspective. You can see the costs very clearly as an owner but then when something like this happens you say ‘wow, wasn’t that the best money we’ve ever spent?’”