When the mist comes down

Dave Burt isn’t sure exactly when or precisely why depression hit him like it did.

He’d had a run of ill health, with quite a few surgeries, but he also had a busy electrical business that took a lot of his time and energy.

Whatever the trigger, he realised one day that all the pleasure had drained out of his life. And it didn’t come back.

“I think just having surgery after surgery beat me up after a while. And it was also the issue of trying to run a business in a sector that, by its very nature, is very adversarial.”

That’s when the mist, as he calls it, started to come down on him. In one of the videos on his website he describes it as like having the colour drain out of everything.

“I did come to realise I was a quieter version of myself and it got to a stage where I realised I wasn’t enjoying any aspect of my life any more.”

But he soldiered on, and says he was a master at hiding his feelings.

“Even when it was really bad, I would go into pretend mode. I would actually sit in my car and almost give myself a talking to just to get out and go into my office and do what I had to do.

“I would always be asking other people ‘how are you going, what’s up, good work with that job’. And all I wanted to do was go home and get into my bed.”

At one stage his wife Jo, who is a nurse, said to him: “I think you’ve got depression”.

He says he was hoping it would all somehow magically fix itself.

“But let’s face it, if I broke my leg I wouldn’t pretend it didn’t happen, but with depression that’s what a lot of people do.”

He says he probably lived with it for two years before a combination of things helped him.

“One of them was my wife saying one day, I’ve made an appointment with your doc, and you’re going!’

“I went along and the doctor was pretty good - I got to know her pretty well because the rest of me kept breaking - and she put some treatment in place.”

But getting better, he says, was helped by talking to the right people. He had a psychologist for a while who gave him some strategies, and when he plateaued with those, he went to a clinical psychologist.

“And there are also those people who you can depend on, your mates.

“Sometimes depression can grind you down so much that you almost feel that you don’t matter, which I know is pretty common. But the people in your life let you know that you do.”

He turned his story into a book Lengthening the Shadow, based on a 10-week gym challenge designed to get him moving again, and losing a bit of his middle aged upholstery.

The book weaves the story of that challenge along with his depression and how he came out of it.

It’s also the basis for his own crusade to shake things up and to get people talking to each other, particularly in the trades where pressure is particularly fierce.

Dave should know, he’s been there, is still doing that.

Raised in Stokes Valley in Wellington, he became an apprentice electrician at 16 and then started his own business. When he found he didn’t have the skills to control a rapidly growing company, he studied for a Master of Business Administration through Massey University in 2000.

“It was s typical thing - being trained as a sparky when 16 and running a business then thinking, ‘I might know how to wire s*** but the business of making money and putting systems in place was something else.’

“I thought the MBA would be a good course of action, and it was.”

Now his company, Team Cabling, has about a 100 staff with offices through New Zealand.

He’s on the board of the Master Electricians and sees the pressures other people are under.

He says a key thing for tradespeople is how little time they leave for themselves.

“If you look at all the roles you fill in your life – father, husband, boss, business partner, you’re a whole lot of things to a whole lot of people. But you’re also an individual and if you look at the amount of time you leave to look after yourself both physically and mentally, I don’t think it’s enough.

“And our industry is terrible for that, with long working hours and the pressure that people are under and the way people try to deal with that. I mean, alcohol’s bad in the industry … we’ve got to give ourselves more time for ourselves.”

Since the book has come out, Dave’s been working to push the phrase: “What’s happening in your world?”

It’s designed to be more than just the usual howyagoing, to which the standard Kiwi answer, even if you’ve just lost an arm, is “yeah, good”.

“I think as tradies we say, ‘we’re blokes, we’re tough, our mates are tough, they don’t have weaknesses therefore I don’t’.

“But everyone does and from time to time people have s*** they have to deal with, and it can be tough.

“If you want to be a good mate you’ve got to ask the tough questions. It’s just about changing the mindset and I don’t think it’s hard to do.”

He says he’s impressed that Site Safe and BRANZ are doing a study into suicide in the construction sector which should be out at the end of May.

“Congratulations on you guys for doing that.

“I was thrilled when I heard that that was taking place.”

He says his book has prompted many tradespeople to talk to him about their experience with depression and he is keen to work on pushing for a culture shift.

“I got a phone call from a guy who I’d known for several years. It was shortly after a 21-year-old guy in Christchurch walked off the top floor of a building on a Saturday morning.

“The boys down there knew him really well and they were pretty cut up.

“I went down and had a chat to them and said to them to ask the question of their mates, ‘What’s happening in your world’ – find out what’s going on so they know they can talk to you and be real.

“Then, from that talk, one of the guys was talking to another person. He put him on to my videos and the bloke rang me from the side of the rode, literally in tears. He was saying ‘god, I’ve got to do something about this.’

“And you just realise how rife it is.”

For more information go to Dave’s website which includes videos of him talking about his experiences and other resources.

For help go to: 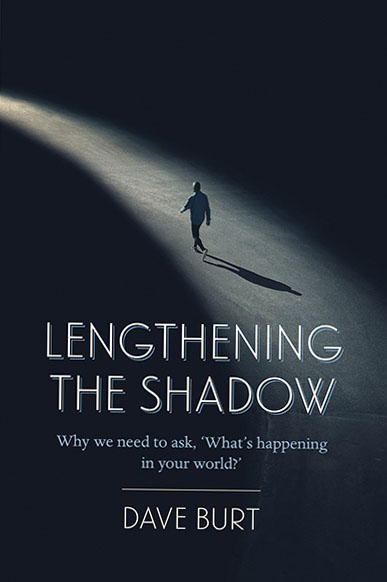