Congratulations to the team at Housing New Zealand for receiving the Judges Special Mention at the 2015 Site Safe Health and Safety in Construction Awards.

Housing New Zealand is a Government agency which provides housing services for those in need, and owns approximately 67,000 properties which house about 193,000 people. 6,200 of these properties are situated in Christchurch and during the 2010 and 2011 earthquakes, more than 90% of these properties were damaged.

The Canterbury Earthquake Recovery Programme was established by Housing New Zealand to take ownership of the repair of around 5,000 homes, and rebuild of 700 new homes.

Glenn Conway, Manager, Communications and Stakeholder Relationships (South Island) at Housing New Zealand spoke to Site Safe about how a small change can make a large difference, and it’s as simple as having a conversation.

Following the Christchurch earthquakes there was a substantial amount of building activity being undertaken in order to repair around 5000 homes and rebuild 700 homes. At the peak of the activity, there were 1000 contractors on the ground undertaking this work.

With high building activity comes high risk. It was important that Health and Safety was held at the highest priority and extreme caution was exercised, particularly in earthquake prone conditions.

Due to this there was a need develop a programme which would allow Housing New Zealand to prevent and mitigate any issues. The main objective was to create opportunities for conversation around health and safety, as part of the natural working day’s activities.

“We wanted to ensure the people on the ground are the ones engaged with health and safety and are talking about the issues, looking at solutions and keeping it in the forefront of their mind with each job carried out.”

Housing New Zealand employed a designated Health and Safety Advisor to effectively and consistently engage the contractors early on in the development process.They mentored and supported the contract managers and Housing New Zealand staff who engage with the contractors to have these conversations. The Health and Safety Advisor held a series of face to face meetings with contractors where the concept of the programme was raised and their feedback was considered. They worked together, taking into account day to day health and safety issues that would commonly arise, to develop a straight forward programme which would cause minimum disruption to work, and slowly become ingrained into daily practice.

Some of these meetings would occur offsite in a more relaxed setting to help engage conversation. It was important to establish strong and trusting relationships with the contractors to achieve buy-in and help shape the programme. The aim was to come up with a solution whereby subtle changes could be made which would bring about big differences in the standard of health and safety practice on site. “Rather than contractors just repairing 5,000 homes, we wanted to create a culture and a practical and easy tool to allow health and safety to shine through every step of the way”.

By ensuring the contractors were fully aware of what Housing New Zealand were trying to achieve, they recognised it was in their best interests to adopt the philosophy and engage in the process. “It wasn’t a hard sell, everyone was on the same page that health and safety was paramount.”

Glenn highlighted that whilst it was important to get a good job done, there was no compromise on quality and certainly no short cuts when it comes to health and safety. “Whilst we led and drove the programme we didn’t force anyone into it. We encouraged them by showing how important it was for us to ensure they made it home safely to their families each night.”

The feedback, ideas and information gained from these meetings helped shape the more tangible parts of the project. A form was developed to help contractors effectively assess the site, then engage in a positive health and safety conversation with the workers. Areas for improvement were addressed constructively. The assessment form would then be completed once the contractor left the site so the process is not mistaken as an audit.

A training package was developed so all staff were consistent in their use of the HomeSAFE tool. This training included how to conduct the positive conversations, leading by example, how to identify and deal with a critical/fatal risk, and how the process is measured and fed back to relative parties. The HomeSAFE programme was also on the weekly meeting agenda whereby staff were encouraged to outline an example of a successful “safety conversation”.

The contractor engagement undertaken to shape the programme, the development of the HomeSAFE tool and training regimes, and programme reinforcement at meetings resulted in tremendous buy in from all stakeholders. “Very early on everyone supported the programme and every one could see the merit in it.”

One year on and the programme has proven successful. There have been an estimated 3,000 staff and contractors discussing positive safety on Housing New Zealand work sites, and this shows HomeSAFE has generated greater awareness and understanding of the many health and safety issues that occur on worksites.

Key learnings that were taken away were to be open in the process, encourage conversation, and sell the benefits of a culture where health and safety is a conversation that seamlessly flows into each day for everyone on site. “The beauty of HomeSAFE is that it is a two-way safety conversation. Workers want the opportunity to provide feedback while managers can verbalise their expectations at the same time, and also learn from the workers on site to enhance their own knowledge.”

Since the programmes release there has been a drop in the number of incidents recorded, and an increase in hazards reported. Contractors have even taken the concept on to other work they’re undertaking, this shows they are truly on board.

The programmes success has seen it expand into the new build programme with the establishment of the BuildSAFE programme. This uses the same concept, but it is applied to a new build rather than repairs. Housing New Zealand have also started the groundwork for rolling the HomeSAFE programme out across development projects nationwide.

The Judges commented: “It is fantastic to see this category extending beyond traditional construction companies. Housing NZ has done a great job with this initiative by focusing and reinforcing positive safety behaviours, we look forward to seeing this programme rolled out nationwide.’’

Glenn Conway is really proud they’ve played a part in trying to ensure that health and safety is an ongoing part of the conversation. “In all activities we do, we take it as a top priority.”

For more information on our awards visit our Health and Safety Awards page. 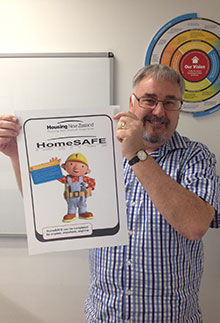