The vision, collaboration, and leadership David Taylor showed during the large Waikato 50 project earnt him the Safety Leadership Award for small, medium or large organisations at the 2021 Site Safe Health, Safety and Wellbeing Awards. We spoke to David to learn more about his efforts on the project that was crucial to responding to Auckland's drought. 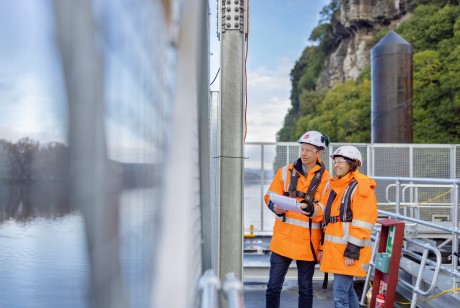 A record-breaking dry summer took Auckland's water storage lakes down to just 42 per cent in May 2020.

The dry spell prompted restrictions and a plan to fast-track additional water sources.

The Waikato 50 water treatment plant in Tūākau, delivered in collaboration with Beca, Fletcher Construction and Fulton Hogan, was a crucial project in response to Auckland's drought.

The mammoth project created challenges for senior managers. While dealing with the pressures from the COVID-19 pandemic, the project also included a non-negotiable timeframe with design and construction running parallel, a tight site working around existing infrastructure and assets, and managing a massive workforce including high numbers of subcontractors.

David's efforts earnt him the Safety Leadership Award for small, medium or large organisations at the 2021 Site Safe Health, Safety and Wellbeing Awards.

The judges, commenting on David's award, noted that they were "mightily impressed" by the wide range of activities and actions taken to implement safety initiatives such as toolbox talks through to facilitating local accommodation to reduce fatigue caused by commuting.

They said the "vision, the collaboration, and the leadership" David possessed was what highlighted him as an award winner.

"The judges also want to recognise and acknowledge the significant foundation provided by Watercare's Enterprise Model, which rests on trust and collaboration and aims to reduce construction injuries by 20 per cent every year, and also by Fletcher's new nine Life-Saving Rules."

David said the collaboration between the teams at Fletcher and Watercare was key to the project's excellent safety record.

"I know my name has been put forward, but it was a real team effort, and that went all the way up to Watercare and Fletcher senior management."

He said the team held a "singular focus, " which brought everyone together.

"We were actually rewarded for working together, and it was very much a one-team approach."

David's leadership style on the project was to be an "enabler" and remove "roadblocks" to allow everyone else to get on and do their job in the best way possible.

"To me, it's about connecting the dots. I think communication can be our biggest asset or our biggest weakness at times," he said.

"I've been in construction [for] 14 years, and it's all about teamwork. You just don't do things on your own, especially when you're talking about a project the size of Waikato 50."

Given the fast-track nature of the project, David said there could have been a tendency to rush, so there was a push for additional training and focus on health, safety, and wellbeing.

"A lot of our people were travelling reasonably long distances to get to site so [there] was a big focus on managing hours, managing fatigue, renting local accommodation to give people an option, so they didn't have to travel long distances."

Management sought accommodation near the site and covered travel expenses so the workers who regularly travelled from around the country to resource the project could frequently return to their families.

It was critical fatigue was managed well to mitigate any safety risks.

"We wanted to make sure that when people were on-site that they were fresh and actually thinking about what they were doing [because] otherwise that's when we see mistakes get made."

There was also a focus on getting a lot of positivity out to the team and, by doing so, creating a positive culture, David said.

"As a team, we made a conscious decision that we didn't want to just bash people over the head and give them a whole lot of negative feedback when things went wrong.

"You tend to find you get a lot more engagement from the team if you actually celebrate the good stuff."

Getting this positive feedback to the team was often achieved through the many toolbox talks from the site leadership team, including having special breakfasts and morning teas when the project met particular goals.

"It was quite powerful having the Watercare Project Manager addressing the team at the toolbox [talks] and saying ‘yes, we know we've got strict deadlines, and we need to get this job finished, but we're not going to do it at the expense of safety’. That's something we can say quite regularly, but it's good to have that backup from the client as well."

They also tried other initiatives to keep safety and wellbeing high, such as adding ventilation fans, an ice maker and trialling cooling bibs so those on-site could stay cool during the hot summer months.

During the cooler periods, everyone on-site was given good quality wet weather gear, warm jackets, and the appropriate personal protective equipment.

David said it was "quite humbling" to be recognised with the Safety Leadership Award, and it reflected the exceptional leadership of many within the team.

"When we approached this award, we took leadership as being leadership of a whole load of individuals in Watercare and Fletcher, and I'm just very proud to have played my part in it, and ultimately in playing a part in actually keeping people safe and delivering a job with good health and safety and wellbeing outcomes."

David and his team are now involved in delivering Watercare's $123m wastewater treatment plant at Snells Beach in Auckland.

There have been several "lessons learnt" workshops since completing the Waikato 50 project, and David said he hoped those learnings would be carried over to upcoming projects.

"My hope, especially with Watercare's Enterprise Model driving us to be more collaborative and to work together, is that we can build on some of the good stuff we've done at Waikato 50 throughout the other Enterprise Model projects.

"There's a bit of work in upskilling and training our people on how to work in more live operational sites, and a lot of learnings came out of Waikato 50. We need to take these on board and take them forward; that's an area we'll be focusing on."

"I've been in construction [for] 14 years, and it's all about teamwork. You just don't do things on your own, especially when you're talking about a project the size of Waikato 50." 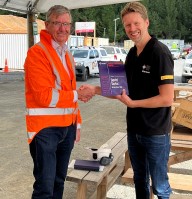