Congratulations to Jo Prigmore and Neill Kydd from Fulton Hogan Marlborough for taking out the Safety Contribution Award at the 2016 Site Safe Construction Health and Safety Awards.

In use since the 1960s, the Fulton Hogan Renwick Quarry and Crushing produces about 80,000 tonnes of sealing chip and concrete and roading aggregate each year.

The site includes a crusher, concrete plant and asphalt plant, and is manned by a small but dedicated team.

Crushing machinery has many dangerous “nip” points where two rotating surfaces come into contact. These are high-risk points where workers can easily be seriously injured. One way to reduce the risk is to use a guard, a fixed surface which is put in the way so there is only one moving surface, removing the chance of being dragged in. But the guarding must be very carefully adjusted, otherwise the nip point will remain. There are written standards outlining the correct distances and sizes, but workers found these difficult to use and carry on-site, especially as paper documents don’t travel well on dusty, windy quarry sites.

After attending a WorkSafe information day, Neill and Jo became convinced of the benefits of nip guarding and began to introduce it at the Renwick site, as well as promoting it throughout Fulton Hogan and other businesses in the region.

The pair became recognised as authorities on the subject and started to share their knowledge by auditing other Fulton Hogan sites. Their “can do” attitude helped to show other operators that nip guarding could be safe and practical at the same time. The combination of Neill’s strong operational background and Jo’s passion for safety encouraged workers to ask questions and think about solutions to safety issues. During these audits, it became clear a better solution was needed to make the guarding standards user-friendly. Using the MBIE guidelines, the pair developed a simple wheel device, which shows the required distance and size of guard.

In addition to the guarding wheel, the pair worked together with staff to improve the quarry management plan, developed a staff safety handbook/site induction document and developed an audit tool.

Throughout this work, Jo and Neill’s approach was to collaborate with workers, making sure they kept things practical, and in keeping with what actually happened on-site.

“Because the guys were involved and we had tested things out, they were happy to be upfront and say ‘hey, this isn’t going to work’. They were involved in the whole process. That input meant that in most cases, they didn’t have to change how they worked. We found people were offering solutions when things weren’t working, rather than just complaining.”

“It gave the guys ownership of their safety processes,” Jo said.

Thinking of workers as clients was key to the approach, Jo said.

“They are the customer. Safety historically has been a policeman’s role but it’s actually a customer service role. For example, if you tell someone to wear earmuffs and they don’t understand why, then you are going to have to police that, rather than being there to check the quality of the earmuffs and test how well they are working.”

“Our approach was to simplify the whole process and take something complicated and turn it into something that that the average guy can use.”

“For the guys like me on the ground, we need to know the outcome and see the reasoning behind it - you don’t want the people up top giving you a lot of rubbish that you can’t deal with at the bottom. It has to be practical, because you’ve got to be able to implement it.”

A big benefit of the pair’s work was changing attitudes to health and safety, Neill said.

“People don’t walk around scoffing at health and safety anymore. They understand that it’s necessary and we’ve got to get on with it and that we are actually trying to make life better. Once they understand that, you are more than halfway there.”

“And if you can stop someone sticking their hand, or leg or foot into the crusher because they understand what the guarding is meant to be, then we’ve accomplished something, haven’t we?”

“Staff now have the appropriate language to challenge things they don’t think will work and are much more involved in safety and understand why things are being done.

“They are far more confident in raising safety ideas.”

By working together, Neill and Jo had successfully led a step change in quarry management practices, Tim said.

“Neill and Jo show what can be achieved when a safety professional and an experienced operator work together to tackle a range of problems.

“Neill’s operational knowledge, coupled with Jo’s practical approach to safety, has shown that no-one in the industry has an excuse to say that safety is too hard, or that it gets in the way of production.” 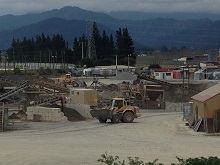