Piritahi's work on redesigning the classic waratah rammer won them the Safety Innovation award for large organisations at the 2021 Site Safe Health, Safety and Wellbeing Awards. We caught up with Piritahi's construction manager Kusay Bearakat to find out more. 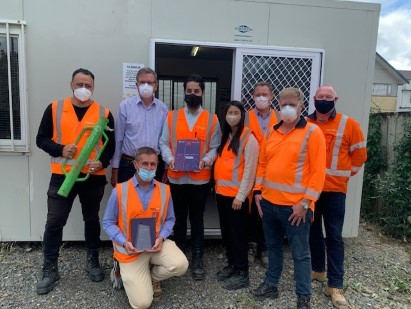 Something needed to change after a worker using a waratah rammer "sliced" his hand requiring stitches and time off work in March last year, Kusay said.

Piritahi, an alliance of companies, was formed three years ago to deliver infrastructure and amenities for Kāinga Ora's large-scale urban development projects.

Piritahi staff typically use a rammer to drive up to 500 to 700 waratahs into the ground each week, but the old-fashioned tool has a habit of causing injuries.

Kusay said the waratah rammer was the cause of "a good number" of the about 90 hand-related injuries at the alliance during this time.

"We're all empowered to say something, and part of our golden rules as well ... is that if something is not right, you stop it. If something's not safe, you should stop it.

"The last thing I would want to hear ... is that someone … saw something not safe, walked away [and] did nothing about it, but that's a very common picture in New Zealand."

Kusay, alongside health and safety manager Matt Ward and their respective teams, set out to redesign the rammer, committed to improving its safety for the industry.

The first plan of attack was to work with their leading supplier of waratah rammers, Cirtex, to gather designs for past prototypes and to approach the on-site teams and supervisors who use rammers daily for their insights.

The first prototype the team brought to the site was "an absolute failure", Kusay said.

"It was heavy, it was like loaded [and] it created other hazards."

The team returned to the drawing board, redesigning the rammer, ridding it of the new hazards but adding too much weight.

They eventually were able to decrease the extra weight. It then went back on-site for the teams to trial and was a success.

"[It was] developed with the people that use it [because they] are the ones that actually should have the most opinion, not people that sit in an office behind a screen."

The key focus was always to mitigate the hazards created by the rammer for everyone rather than just the alliance exclusively, Kusay said.

"I'm just … happy that this is actually being used industry-wide. I don't care if it's got our name on it or not; that's the least of my worries.

"Safety shouldn't be kept to an organisation. There is stuff that can be done safer and better all throughout.

"Why should we start putting other people at risk just because we wanted to say 'this is our idea, this is for us'... no, who cares about that? I think that's the big picture of safety."

Kusay said there had been zero related hand injuries since the alliance replaced their old rammers with the revamped design.

"You don't put money on safety, and you don't keep safety to yourself."

Piritahi's efforts won them the Safety Innovation award for large organisations at the 2021 Site Safe Health, Safety and Wellbeing Awards.

"I was stoked to hear we were finalists, to be honest, especially when you're competing against some very large organisations, but then to know that we won was a [really] great email to read and was probably one of the highlights of the year so far," Kusay said.

The rammer was a "reflection of everyone's hard work,” he said.

"I feel massively [appreciative] that we didn't do something just for an award, we did something for the industry, and this was kind of the icing on the cake."

Kusay said the team would be analysing their safety statistics each month and raising awareness to any issues that arise to improve and drive further innovation.

"Sometimes, something that's already there just needs to be redefined to make a big safety impact. You don't have to invent something to win. Small concepts could also win as well."

"We're all empowered to say something, and part of our golden rules as well ... is that if something is not right, you stop it. If something's not safe, you should stop it." 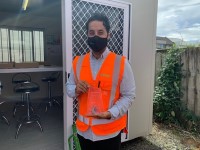