Congratulations to Spiral Drillers Civil for taking out the Safety Innovation Award for small to medium businesses at the 2018 Site Safe Construction Health and Safety Awards.

Creating a workplace culture which fosters Kiwi ingenuity is saving both time and money for one Auckland-based company. We speak to Managing Director Jon Faber about how a simple idea turned out to be a game changer.

As a specialist drilling company, Spiral Drillers Civil take pride in tackling tough jobs and coming up with ingenious ways of solving difficult tasks. Established in 1971, the team of over 30 has recently expanded to include Hauraki Piling. As part of their work, they are required to drill into volcanic rock, a time-consuming and difficult task, which involves using noisy handtools to remove the plug of rock from the drill barrel. Using these heavy impact tools, such as sledgehammers and jack hammers, has caused several injuries in the past.

After seeing a worker injure his wrist trying to remove the rock plug using a sledgehammer, the company’s operations manager was struck by the idea that there must be a better way. Using an old vibratory hammer, he devised a “shaker” which vibrates the core of rock out of the drilling barrel. Not only does the device remove the risk of hand or wrist injuries, it also eliminates the risk of noise exposure from heavy duty hand tools.

“The cool thing for us was that the guys came up with this on their own. I think it really says something about the culture that the guys are thinking about how to make things better and how can we improve.”

“We are always looking to continuously improve in all areas, not just health and safety – how can we do things quicker, safer and with more smarts.”

“You can always improve – so I’d never say we’ve got safety ‘sorted’ but we’ve got the culture sorted. If someone comes up with an idea, they know that it won’t get knocked back - we will back it to the hilt and run with it. Personally, I think that’s the key to having a good culture and everything else will fall into place.”

As part of encouraging the team spirit and boosting health and safety, Spiral Drillers Civil have introduced some simple initiatives:

“You can never be confident that you’ve got it all nailed down, but we’ve got a really good culture with long-term staff and the guys are a really tight knit team that have our backs. We try to look after them and try to give back, so it goes both ways,” Jon says.

Not only has the “shaker” removed the risk of manual handling injuries and reduced noise exposure, it has proved a real hit with the team, Jon says.

“Drilling rock is painful and hard on the gear – it can take hours to clear it by hand. Using the shaker does the same job in a couple of seconds.”

Using the “shaker”, Jon estimates the company is saving somewhere in the ballpark of $20,000-30,000 a year in savings, once man hours and injury costs are taken into account.

“Plus the guys absolutely love it – the boys are always excited to use it.”

Jon hopes the device might eventually be rolled out across the wider piling industry.

“The thing about it is that not only is it better for the guys, but it saves time. It’s a double whammy.

“We really believe it has the potential to improve health and safety standards across our industry, as well as the substantial personal business benefits of saving time and money.”

“We are always looking to continuously improve in all areas, not just health and safety – how can we do things quicker, safer and with more smarts.” 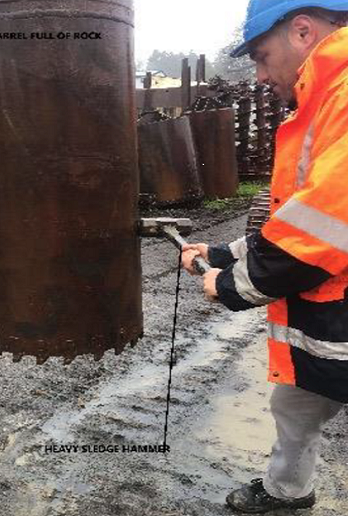